Whatever returns from oblivion returns to find a voiceCurated By: Christine Starkman

You who do not remember
passage from the other world
I tell you I could speak again: whatever
returns from oblivion returns
to find a voice:

from the center of my life came
a great fountain, deep blue
shadows on azure seawater.

When the poet laureate Louise Gluck wrote "Whatever returns from oblivion returns to find a voice" in the poem Wild Iris, the text, perhaps, reflects the artist voice and process of visualizing and materializing ideas to dimensional spaces. Ten works selected from Texas art galleries from Houston, Austin, San Antonio, and Dallas for the online Dallas Art Fair initiative Culture Place know of technical craft, process, narrative, and materiality. Jim Love (1927-2005) Plowed Bear (1972) made of cast bronze and Alex Katz (b. 1927) Three Trees (2018) silkscreen on paper lead the selection of works with technical craftsmanship and conceptual rigor. In Jim Love’s Plowed Bear, the cut geometric shapes of the cast bronze in circles, squares, and rectangles with linear and diagonal striation on the surface produce an image of a toy bear. The eyes made of two mini circles, ears drawn with diagonal lines inside of a curved surface, the nose drawn vertically with five lines as the pinnacle of a four-sided square with triangles, and the horizontal lines above the vertical lines of the neck complete the mouth of the face. The arms, legs and body are constructed with parallel and diagonal lines stacked on top of each other. Love brings together the idea of childhood and toys with the technical craftmanship and materiality of a cast bronze. 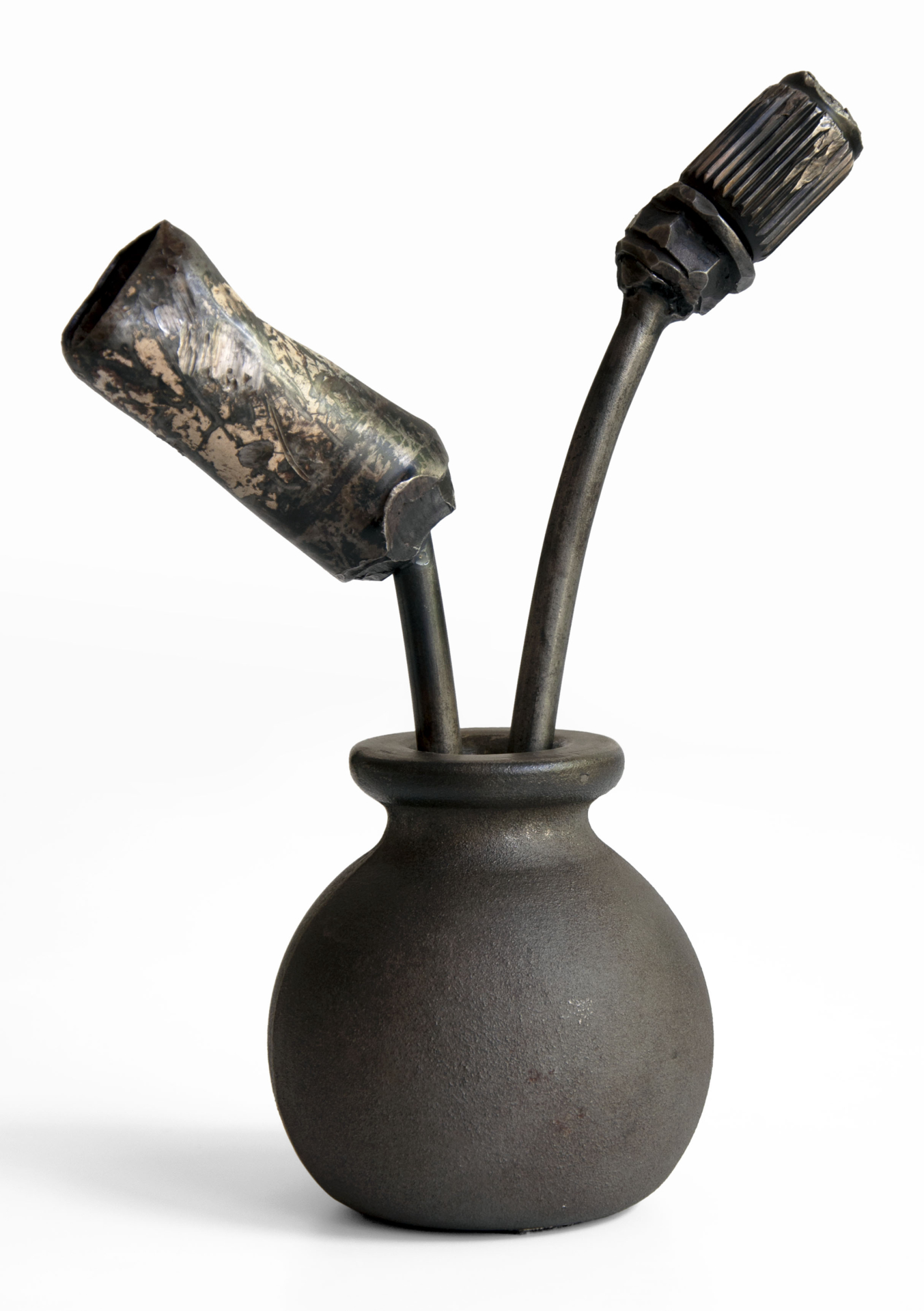 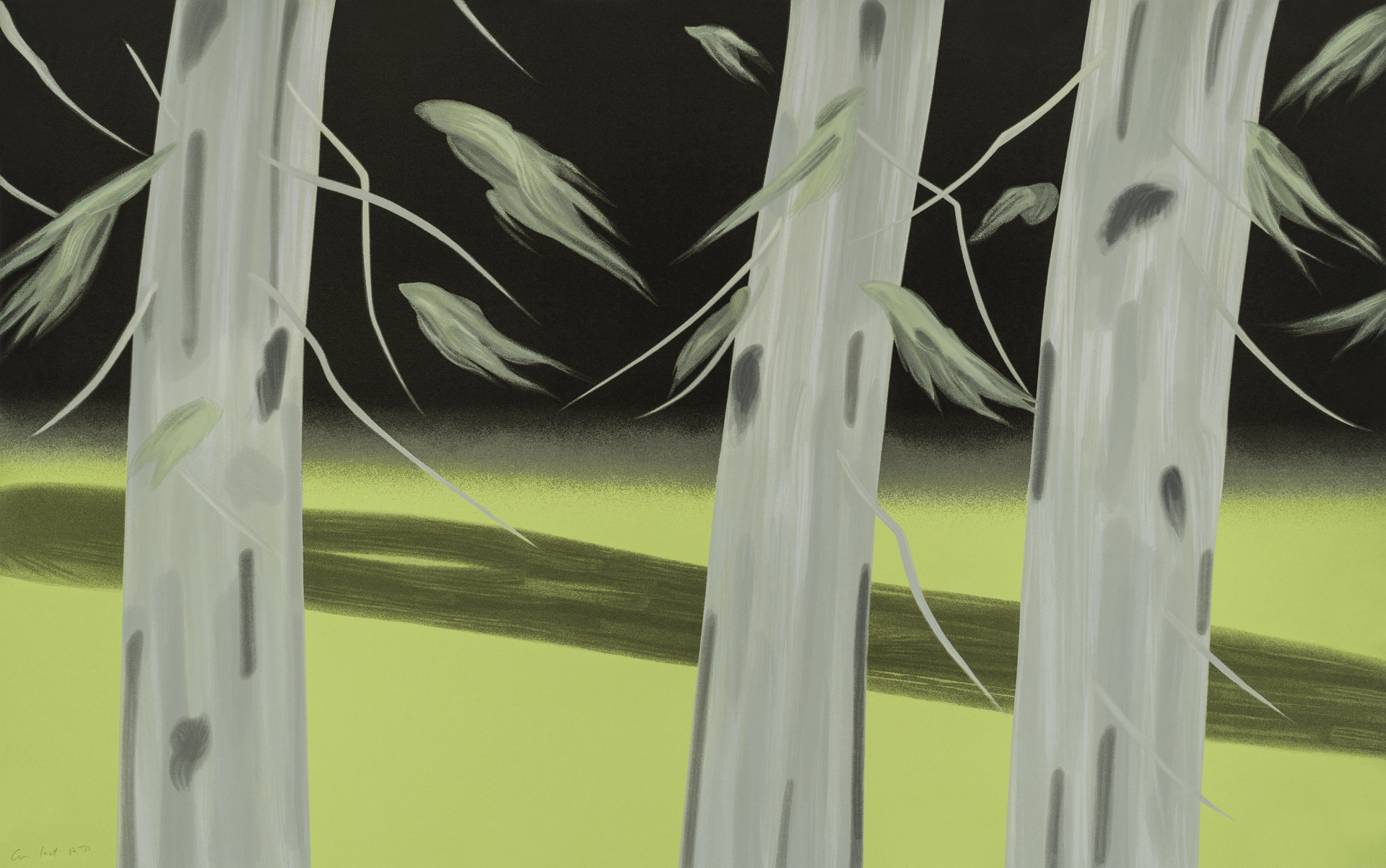 Alex Katz’s Three Trees, silkscreen on paper rely on repetition of image and reproduction as part of a series. Produced as an edition of sixty with twenty silkscreen printing each, only twelve-hundred images of Three Trees will be extant as a work signed by the artist. In Three Trees, Katz orients the landscape with the vertical motifs of the trees and the diagonal line crossing behind the trees in the background. When installed in a room, the viewer locates the ground and sky of the landscape.

Katz captures in the image the wind blowing across the field with leaves floating in a dark background. The time of day is night with the light projected from below and beyond the foreground. The dark gray and yellow horizontal line running across in the midground is the road behind the thick girded trunk of the trees in the foreground. Katz animates the landscape with the slight bend of the tree trunks, lightning shaped branches and feather like leaves crisscrossing the upper half of the foreground. The work is a tour de force of literary and psychological allusions. Twenty large-format prints with frames would create a monumental wall installation. 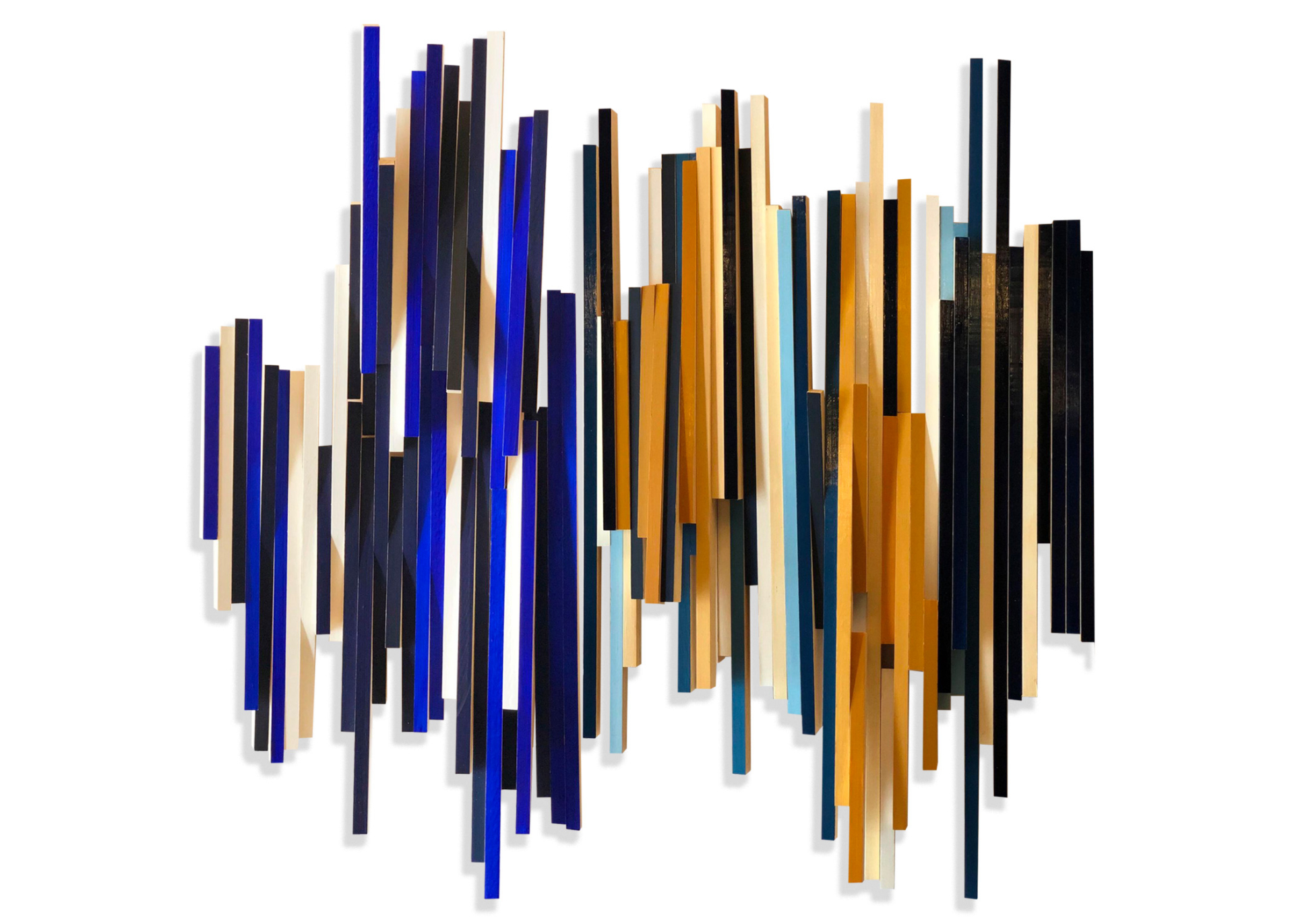 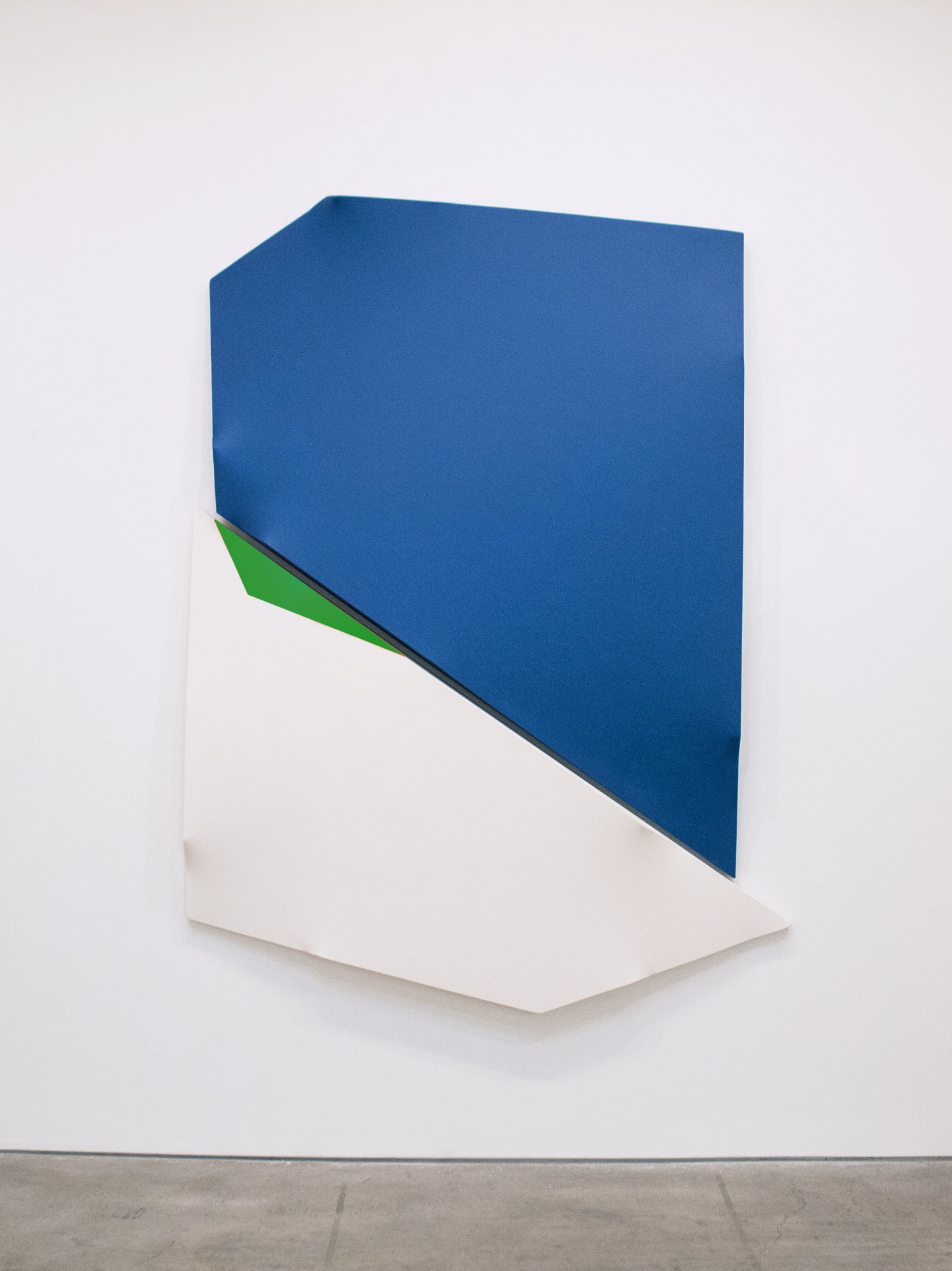 Eduardo Portillo’s (b. 1986) M87 (2020) and Cecilia Biagini’s (b.1967) Pianoforte (Combined) (2018), are improvisations of color, poetics, sybilline surfaces, sculptural, and spatial presence. Biagini speaks of being a medium performing on stage when she gathers the pieces of crafted and painted wood. Words from a favorite literary text and notes from improvised music conduct her every gesture in assembling and attaching each piece next to, on top of, below each other. Pianoforte alludes to the musical notation of soft and loud dynamics in performing a piece of music.  Biagini constructs a three-dimensional visual composition of color and sound.

Eduardo Portillo’s M87 is an experiment in projecting two-dimension in three-dimensional space. Coincidentally, M87 is the name given to a star millions of light-years away. Portillo imagines the shape, color, and location of a planetary body in the midst of thousands of stars. The artist takes photographs of corners, elevated and cantilevered floors, and walls to capture and learn how the light and shadow move across spaces. He then constructs his stretchers with topographic precision to indicate depth and width of a specific location.  Different shaped canvases with lush and vibrant colors are then juxtaposed to take up room with other imagined objects. Portillo is a land surveyor of crafted objects perfectly sighted in a space. 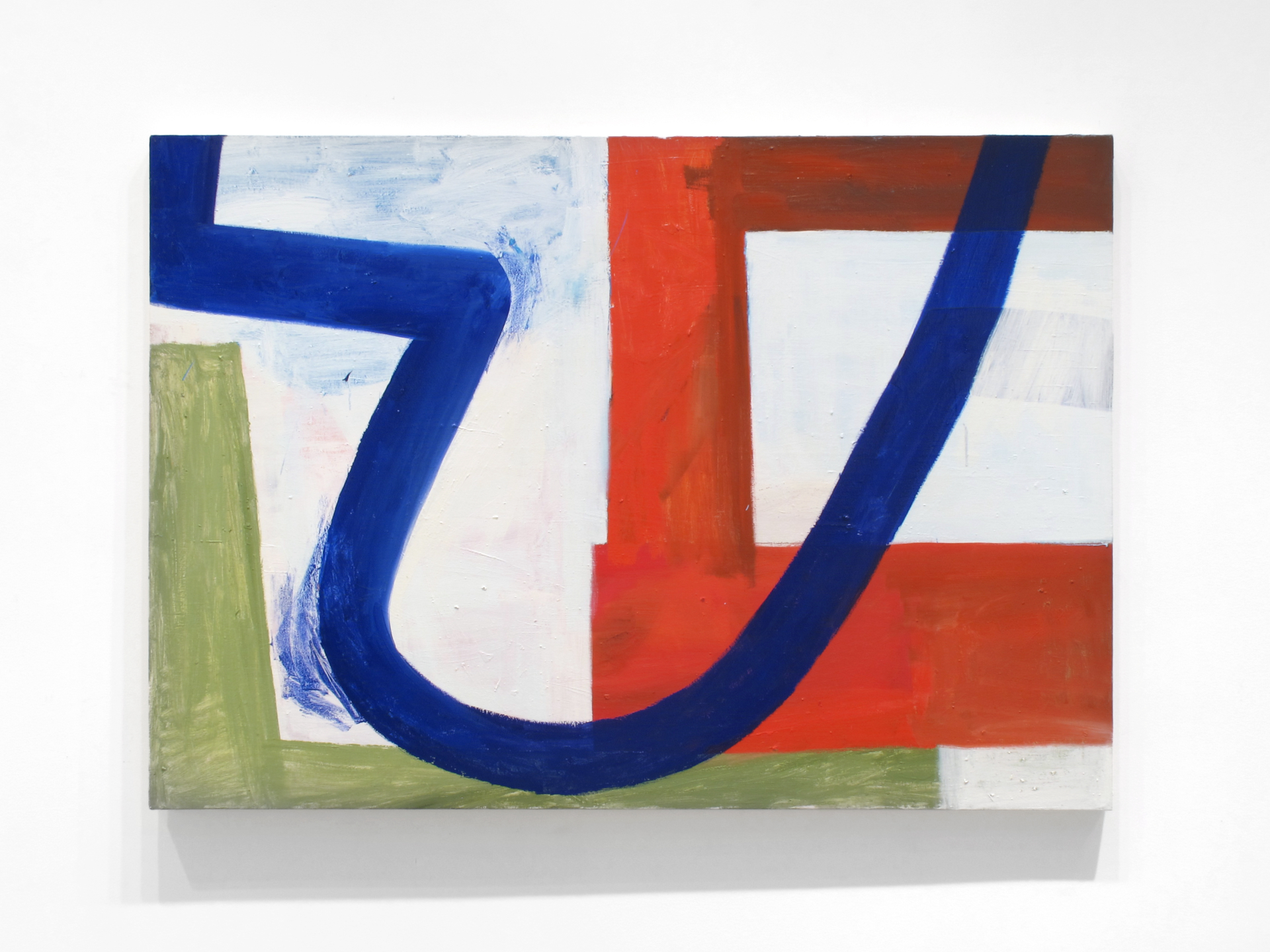 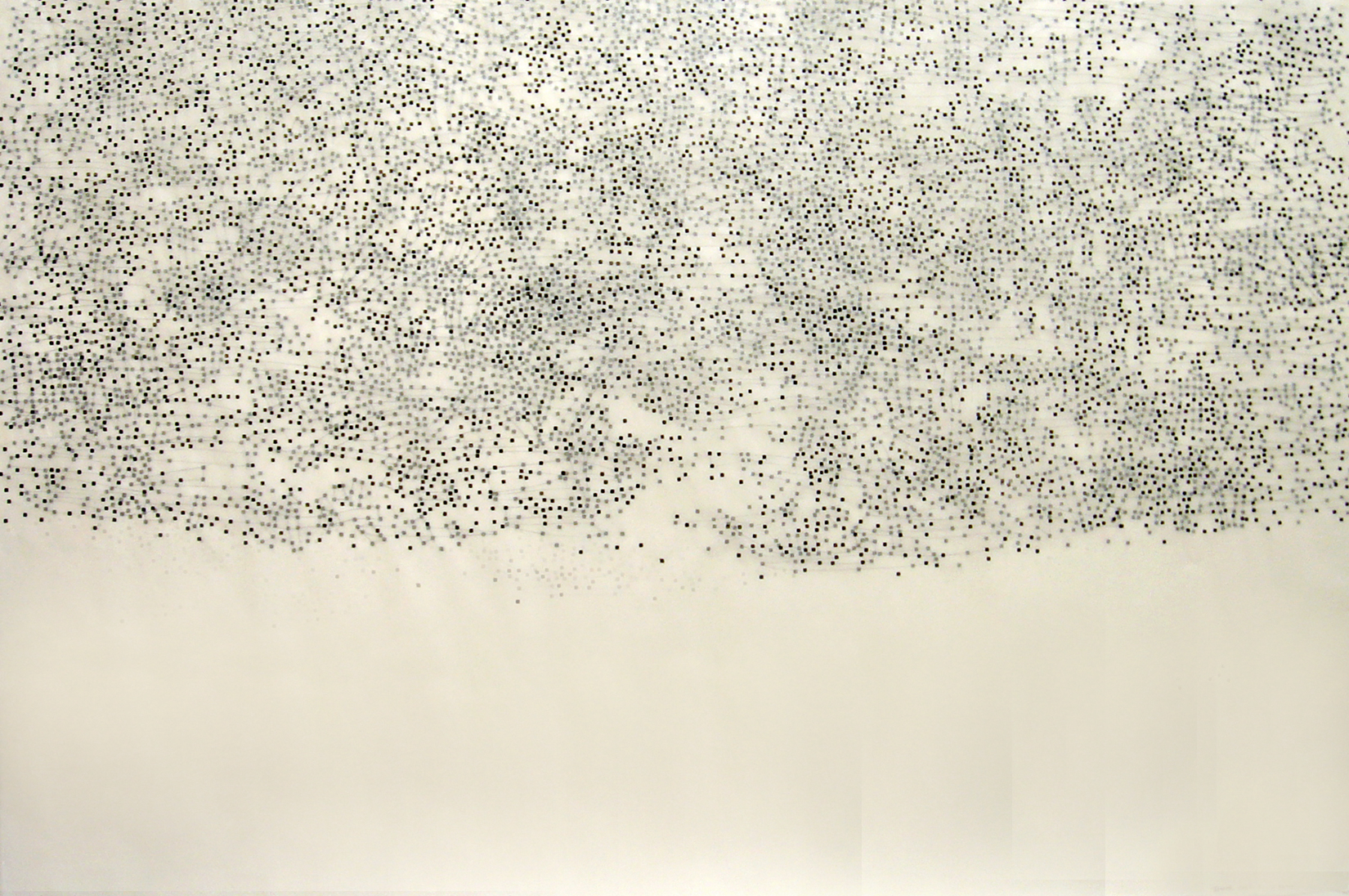 David Aylsworth (b. 1966) Would Napoleon (2018) and Theresa Chong (b. 1965) Of Kabul (2010) are literary and musical aficionados. Aylsworth cites his deep admiration for Gertrude Stein’s writings If I Told Him: A Completed Portrait of Picasso (1923) as one of his favorites of her work. Would Napoleon comes from the first lines of If I Told Him:

Aylsworth breaks with the canon of painting tradition to experiment with a new language of forms steeped with notions of landscape, color, and abstraction. The process of painting relies on muscle memory of previous gestures as preliminary marks on several canvases. The great sojourn then begins with music playing in the background (jazz standards, classical opera, and Broadway musicals).  Aylsworth mixes colors in quart size containers and with a brush lays the color across the canvas. Thick and thin lines of color begin to appear above and below with the white color as the imprimatur surface. In Would Napoleon, a poetic palimpsest from which the colors have been scraped and painted over to produce the vibrant primary colors of red and blue with the light green as the elegant corner and placeholder of the canvas.

In Theresa Chong’s Of Kabul, the artist made the drawing while listening to an audio book of Azar Nafisi’s Reading Lolita in Tehran. Chong imagined a childhood landscape with tall buildings, dense population, and tall mountains in the background. Classically trained in cello, the artist makes her mark on the paper with the time signature specifying how many beats are contained in each measure.  Chong creates a specific grid on the computer, prints the grid and superimposes the rice paper on top of the grid. Using a square template, the artist makes her mark on the intersection of the lines. Visions of landscape, childhood memories, words, and musical notations produce the poetic landscape of Of Kabul. 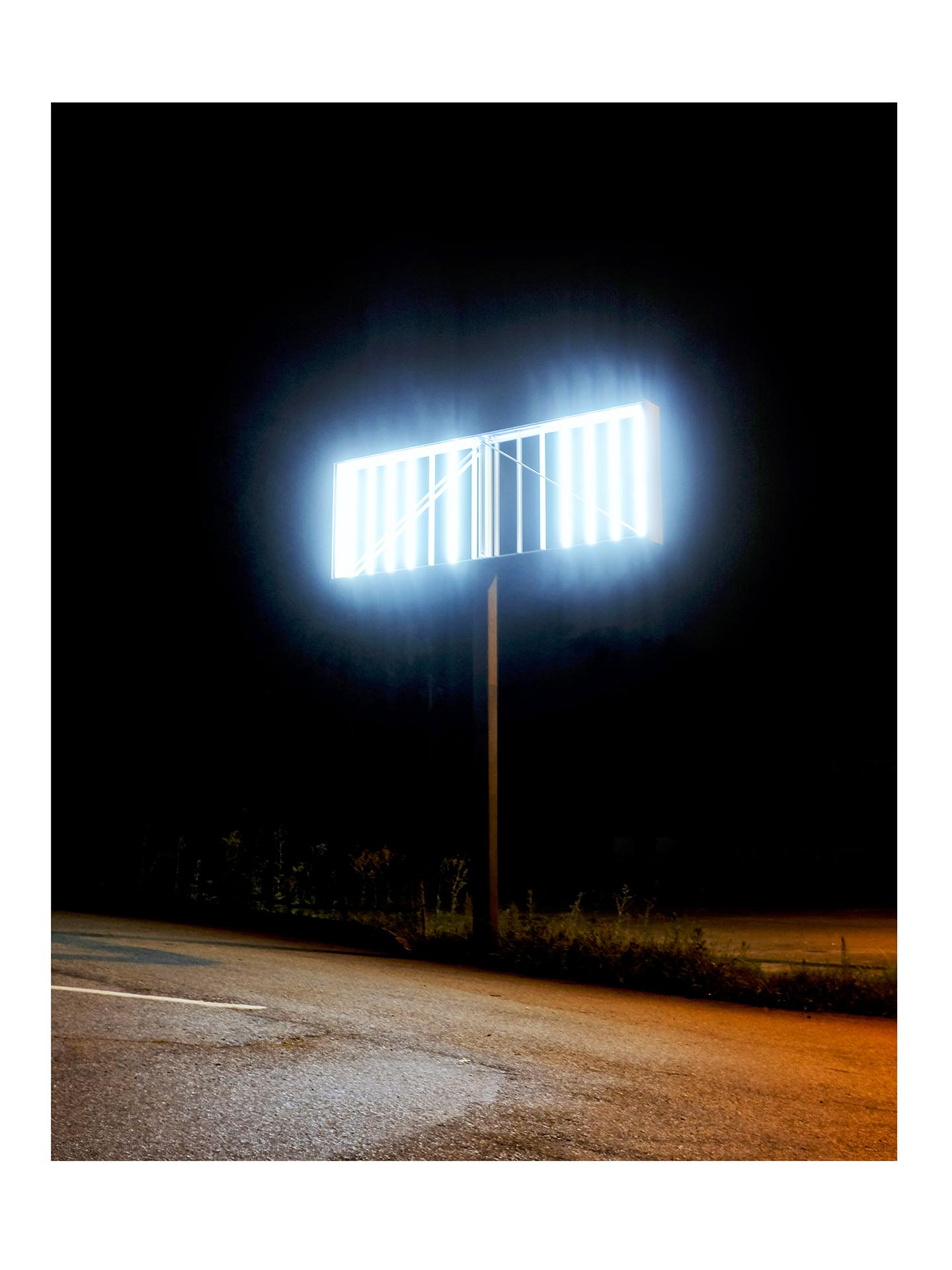 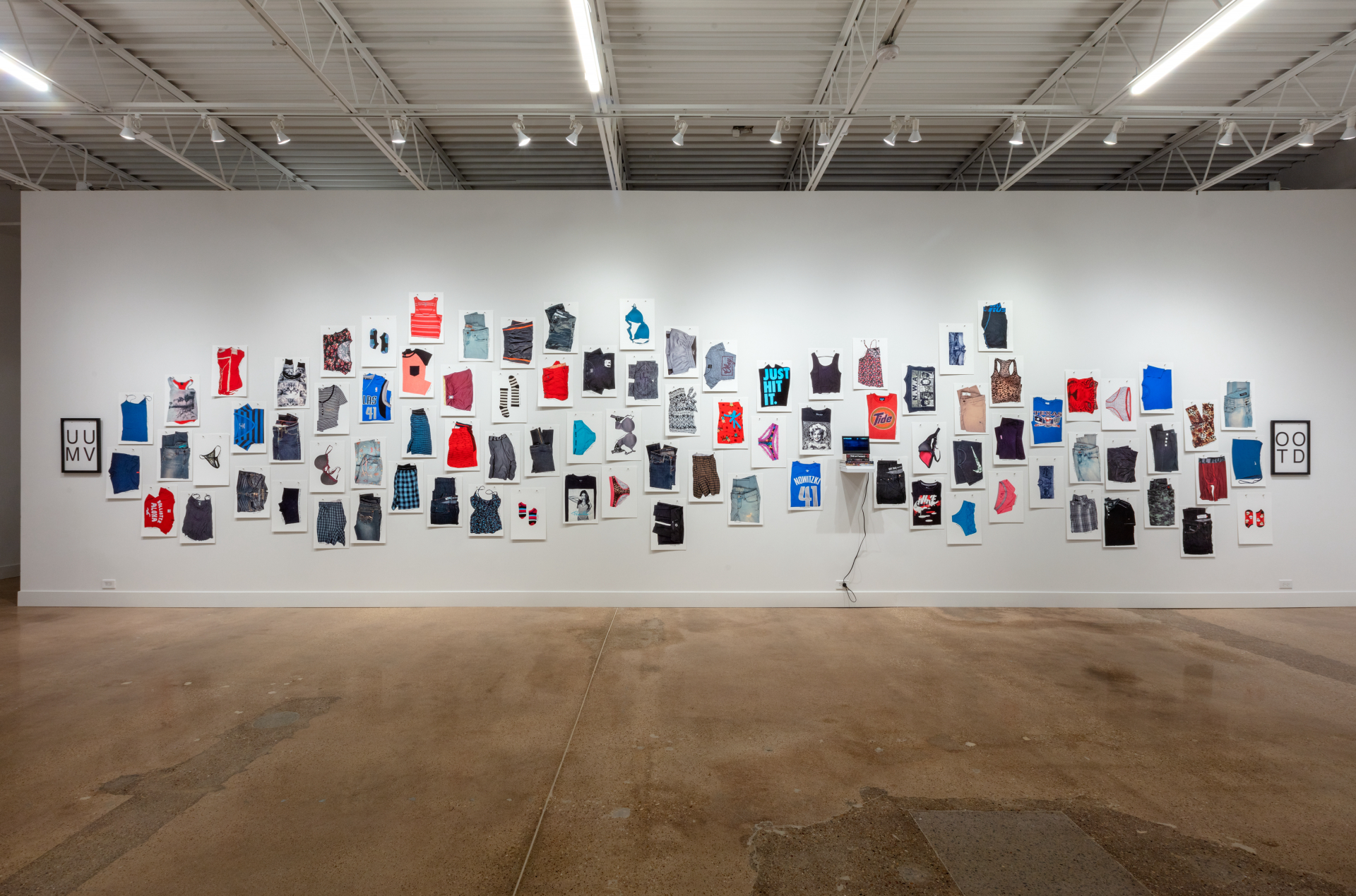 Devin Lansford (b. 1988) Of The Place You’ve Got, # 9 (2019) and Kathy Lovas UUMV and OOTD (2020) are recordings of a place, disappearance of people, and the materiality and resemblance of an image. Devin Lunsford spends his time imagining places and people who are no longer here. His long drives in and out of Birmingham, Alabama (his current home) takes him to abandoned and less populated rural areas.  Lunsford covets the orange golden yellow light of the golden hour (an hour after sunrise and an hour before sunset). He walks and traces the disappearance of people and things. In # 9, Lunsford notices the glowing vertical light in the distance and takes his position to capture the moment. It is a broken fluorescent sign for a closed down business across the street with the white diagonal line still visible marks the parking lot. Abandoned and forgotten for years, the timer for the fluorescent light still comes on promptly at night.

The title Of The Place You’ve Got, comes from the first novel of Southern Gothic author Flannery O’Connor. Lunsford longs for the solitude and exploration inspired by the southern landscape transformed and changed by the twentieth-century American industry.  Now, mostly abandoned and obsolete, the rural towns Lansford frequents are hallowed ground with “no indication of its actual purpose or meaning.”

Kathy Lovas’ UUMV and OOTD comes from personal experience of her car stolen from her driveway and found two weeks later with the trunk full of clothing abandoned by its owners. The artist was inspired by the return of her car full of the unexpected gift of a narrative. Lovas encodes the set of clothing following the biological classification of flora and fauna complete with numbers, latinized words, and pinned on the wall as specimens further deepening the context of the narrative. Lovas demonstrates her technical craft using the process of photo transfer in making the work. The artist photographs each piece of clothing flat on a table to indicate the life-size quality. The image is printed with ink jet on mylar and transferred on optimized yupo paper with adhesive.

The vibrant color and texture of the phototransfer depict the image of the clothing on top of the paper. Each piece of clothing eighty-eight in all is unique in taste and style: brightly colored tank tops of many colors and cut; graphic text on shirts, short skirts; sexy underwear; colorful socks; and eight pairs of jeans.  Lovas folds the pajama bottoms and pants in specific ways to create a repetition in pattern across the wall of installation.

Two framed works with bold sans serif text are placed on either side of the wall of pinned images forming the verso and recto of what the artist identifies as a visual artist book. UUMV stands for Unauthorized Use of Motor Vehicle and OOTD for Outfit of The Day, a humorous take on the inconvenient disappearance of the artist car and the appearance of clothing in exchange when the car was found abandoned in a street. The narrative continues with the question of the identity of the car thieves. Did they own the clothing or were they also stolen with the car? Why did they fill the trunk of the car with clothing? Were they out for a coffee when the car was found by the police? I asked the artist if she had considered the packaging of the set of printed clothing and currently it is under discussion. Kathy Lovas has proposed a visual poetry of a life lived and abandoned with technical craft and materiality. 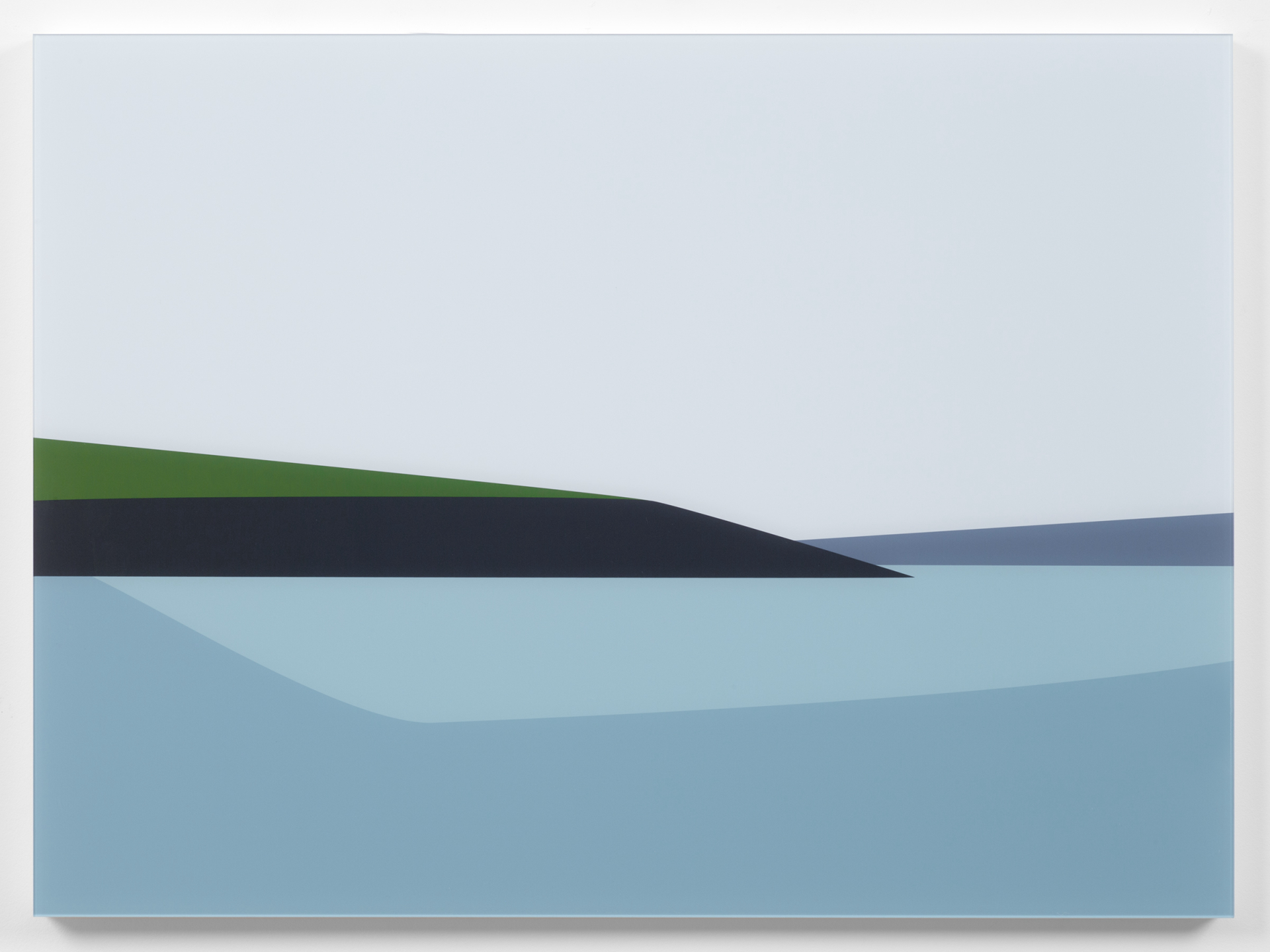 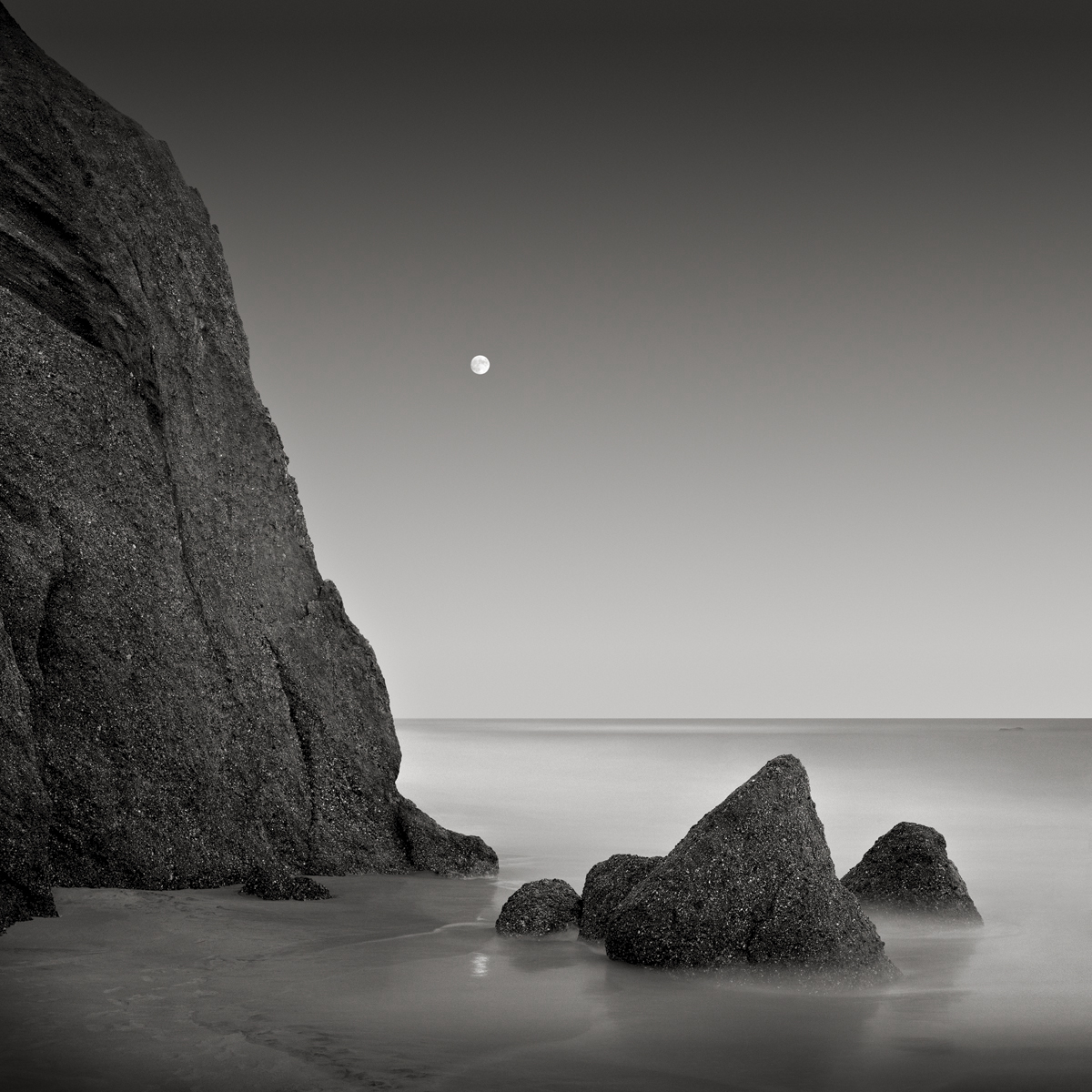 Julian Opie (b. 1958) Polridmouth Coast from Cornish Coast 2 (2017) and David Fokos (b. 1960), Shark Tooth Cliff, Chilmark, Massachusetts (1995) present lyrical landscapes on opposite sides of the Atlantic. Julian Opie photographs seaside landscapes and processes the image on the computer with precise eye for color, contrast, and composition. Horizontal colors of green and black with shades light blue, grey blue and blue-green sweep across the glossy photo paper.  The horizontal dark blue and green color darts out and divides the image in two forming the midground indicating the sky, land, and water. In the title Polridmouth Coast from Cornish Coast 2, the artist sets up dreamlike resemblances to the actual landscape inviting the viewer to remember and reminisce of a place visited in the past.

In David Fokos’ Shark Tooth Cliff, Chilmark, Massachusetts, the artist captures the otherworldliness of a place marked by placid still waters, mist on the surface, clear horizon in the distance, and the moon rising beyond the rocky hill. Over the years, the concept of time has become a subject and an object in Fokos’ images. His ultimate goal is to capture the feeling and emotion of the moment when he takes the photograph. The image he produces is hidden and invisible to the naked eye. Fokos’ discovered time as the key to capturing this moment, the next moment, and the next moment after. He uses a large format camera and sets the aperture for a long exposure. He patiently waits for the moments to come together and takes the picture. The process begins when he uploads the image onto the computer and spends hundreds of hours maximizing and minimizing the contrast. With microscopic precision, Fokos looks closely at the image and brings out the emotion or feeling that lies underneath the surface. The artist adds two or three images to his oeuvre in a year. 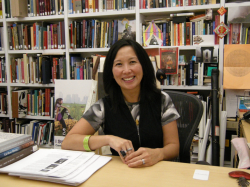 Christine Starkman is a contemporary art curator interested in the global, transnational, and transcultural histories of modern and contemporary art. She has been a researcher and curator at the Art Institute of Chicago, Cleveland Museum of Art, and Museum of Fine Arts, Houston. She has an MA in Japanese art and architecture from the University of Illinois, Urbana-Champaign, and did PhD coursework in art history at Rice University.