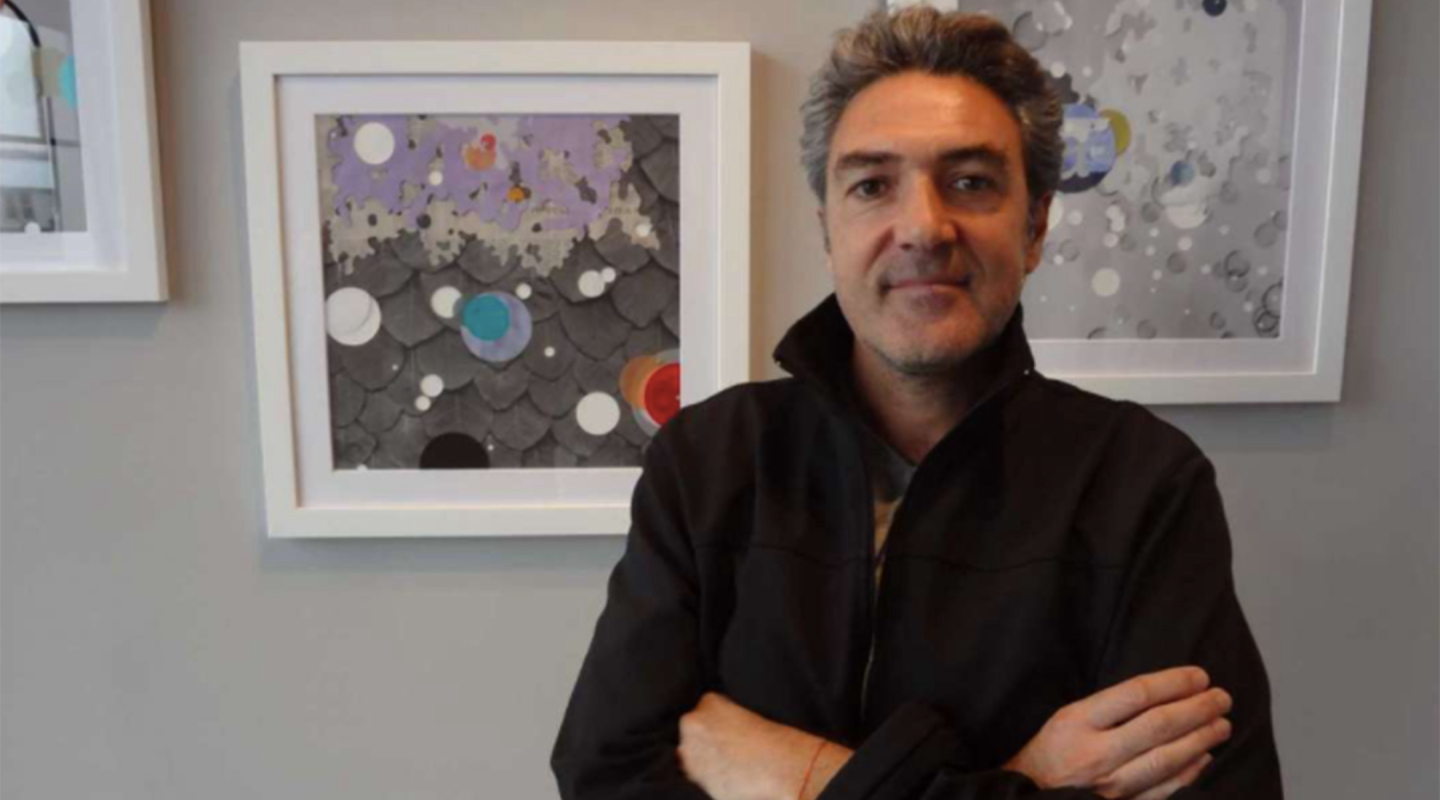 Ruiz-Healy Art: We began speaking about about your experience during the pandemic. As anartist, being a little secluded and a little isolated, how has that been for you?
Andrés Ferrandis: Well, it hasn’t changed much because when I produce I work with music and in an isolated ambiance. So, that hasn’t changed too much, I mean it’s not that I’m working 9-5 and I need to wake up at 7 and then take a shower and dress and go to the office and come back. So, no I haven’t felt the change of being secluded or separated from the rest of normal life. For me, it’s not really a change because it’s always been the same.

RHA: I was taking a look at some of your current work and it’s so unique, I wanted to know what were some influences behind this body of work?
AF: Well, I work with fragments of memory. When I express myself into the constructions, I don’t really know if it’s painting, or sculpture, or installation, it’s like a hybridization of these three things. So basically, what I have is my attention to the distant moments of time, it’s like an exercise of memory. They are fragments of brief moments, experiences, and memories. So for me, the idea of time is very important. What I produce is a fragment of captured time that belongs in the past, but it’s always present because when you finalize a piece of art it’s like a frozen moment of time. The idea of time is always very present in my artwork, although I have changed. I have changed the form, or the order I could say, of the construction of the piece. In the last 15 years, I’ve had an evolution. I can understand much better now my artwork and I can relate it to different things like, I don’t know if you know Joaquin Torres Garcia from Uruguay, I can see now I have a lot of precedence from his work. I also look much more into construction, architecture, and constructivism than into painting. And this thing that is construction, that is time, is also very associated with color. I think color is one of the most important essences of painting or art and the relationship with the eye. The way I perceive things is through color and light more than through an image like in photography. I visualize things in a three-dimensional approach through time, color, and light. It’s been the same concern, this concept of memory, life, and time. It’s always been there but the form of the artwork that I produce has had an evolution in the last 15 years. I can see now that it’s more sincere, more let’s say original, it’s more mine. I don’t have much residence in the art scene today because I create something that is sometimes difficult to define. It’s not a painting, it’s not photography, it’s not an installation, it’s kind of a mix. I also like to use text or words because I have the need to translate the painting in order for the viewer to understand. So it’s kind of a subtitle feel. You know when you see a French film and you have subtitles in English so you can understand what they’re saying? I try to introduce these kinds of subtitles in the construction for the viewer to get a clue of where things are coming from.

RHA: So, you’re saying the text is for the viewer then? Can you talk more about the relationship between your art and the viewer, and how important it is to you that they understand your work?
AF: Well, I’m very interested in order. I think that order relates to mathematics, to the cells, it’s like, I don’t know if you know about the Fibonacci number, the golden proportion? So I try to be very concise with the outcome of the artwork. The finish for me is very important because it’s also something that gets the attention of the viewer. I don't know, for me there’s like an interest to make it beautiful. A nice, finished object. And that’s something that gets a lot of attention from the viewer. Sometimes when I have an exhibition or a show I watch and observe the people, you know what I’m saying?

RHA: You’re watching them to see how they react to your art?
AF: Yes. I watch them looking and they don’t know that I’m the artist. So, I watch people approaching and they walk by, but then they stop and there’s like a hook, you know?

RHA: Yeah, it catches their attention.
AF: So, they stop and go back and look and they approach and this wakens up some kind of interest in knowing more. So, the way I finalize the artwork is quite important, the way you illuminate it and the sequence of the art pieces hanging in the gallery, it’s not like “Okay, whatever.” No. It needs to be really well thought in order to put the colors together, the complementaries, it needs to be a very curated situation because of the respect that I have for the viewer. So, for me, it’s very important this relationship between me that is before, the artist that is now, and the viewer that is future.

RHA: I saw nature as a theme in some of your works like with Aguas and the Islas pieces. What drew you to nature as a topic?
AF: I think my side as a painter is more connected to landscaping than to still life or portraiture. For me, landscaping has a really important connection with time and light, so my interpretation is mostly through landscaping. It’s kind of like a mental landscaping. It’s a metaphysical, abstract, painted or constructed part of time or memories.

RHA: I just had one final question about one of your current artworks. I saw the big sculpture of the word “love”, can you tell me more about that, compared to your other work?
AF: Well this is my new project. I want to develop this idea of spreading words into daily places. I did this first in a place in Baja California in Ensenada. I put this humongous 15 feet tall word made of iron in a place and then the reaction of the people that were surrounding this piece, how their kids play, how people were looking at it, the shapes, the rain getting into it, and the wind moving it a little bit although it’s iron and it’s welded and it’s strong. For me now I think it’s going to be a next step. To use words in places as a sculpture. It’s not doing a sculpture, but doing like a piece, a three-dimensional piece that is going to be words and phrases and sentences to put in a place so the spectator and the viewer can have this relation with what they feel when they see a big word in the middle of a place. You could use a Mexican word like simon or amor or love or rain or life you know, it’s very interesting. It’s like, you put a big word like this in a place and it creates a very nice surrounding energy. It creates a response from the viewer and it’s a physical response because people are there looking at this big word in the middle of a field.

RHA: They interact with it.
AF: Yeah that’s it. They interact. What they understand, what they bring to their soul, to contemplation, I’m really interested in this situation and developing this idea of big words in the middle of places.

RHA: Yeah, like moving outside of the gallery, outside of the interior spaces.
AF: Correct. I just discovered this because I was doing a residence in Ensenada in a place called CRIA and I started using iron, rocks, marble, stone, welding, and it was different. This is something that I just discovered recently. Since my years in university I just worked a little bit with sculpture and 3D, but now it’s something that got into me like seven months ago. It’s something new.