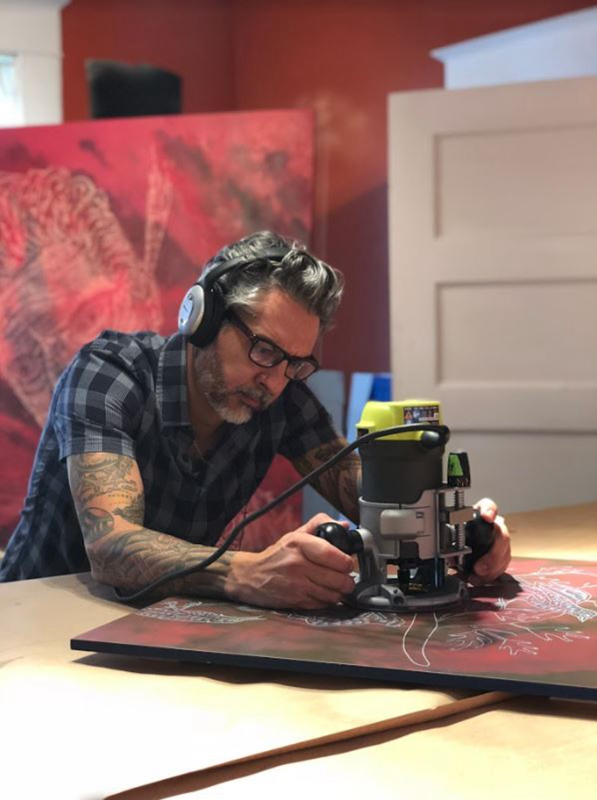 Ruiz- Healy Art: As an artist and a college professor how has your experience been like during the pandemic?
Ricky Armendariz: I’m embarrassed to say it’s been wonderful. All of the time that I’ve been able to devote to my thought process, the physical act of making things, experimentation, the real unfettered schedule has been amazing. It’s a lot like being on a residence team where time doesn’t matter, schedule doesn’t matter, days of the week don’t matter, and you just eat when you’re hungry and you make things all the time. What’s also interesting is that even though I have stuff on my plate and I have shows in the future, there seems to be a little less pressure. Things are constantly getting postponed and it allows me to just keep making and make until something falls into place for a schedule.

RHA: As a professor, do you have any thoughts or opinions about this, especially with the school semester starting?
RA: You know, it’s going to be however it’s going to be. I think about how lucky I am for them to pay me to do what I do, it’s incredible! I still can't believe I get paid to do what I do. I just try to reassure the art students that they’re going to get an education and they’re going to get the best education that we can provide given the situation. If anybody can adapt to this situation it’s artists because we tend to make things either alone or in small groups, and our ultimate goal usually is not necessarily to exhibit or to sell, it’s just to make because you have a desire to make. When you don't have all those pressures it’s easier to do that and students are going to navigate the system the way they need to. I’m going to do weird things like demos online. A large part of me lecturing to students is their feedback so if I don't get a thumbs up or head nods in response to what I’m saying, I don't know if I'm getting through to them. So, it’s going to be really weird in the beginning but I’m just going to look on the brightside. They’re going to get a
lot of free time with this system, there's going to be a lot of self-guided things, and they have to be diligent about that. If they're not, they're going to fall behind and if they fall behind then maybe this isn’t the profession for them. You’ve got to have this internal, self-driven machine, professors are just guides. It’s all about having the tenacity to see things through, this is not something you do for vanity or for money or fame. None of that stuff, ultimately, is obtainable if you're on the path to obtaining it. It comes when all the stars are aligned and everything works out in place.

RHA: That’s a good point. Can you talk about some of the influences behind your current body of work?
RA: Recently I've been dealing with iconography that relates to chance. The notion of luck, the notion of systems like astrology and numerology, and how all of that culturally, informs our outlook on life and our attitude toward the challenges we face daily. Other cultures are more superstitious and Americans tend to be very un-superstitious. Latinos are so intrinsically linked to our language, our culture, the food, and the earth we live on. We’re more tied to an earthbased, matriarchal, superstitious, polytheistic kind of existence. I think we were just more accepting of those things and that flavors a lot of the iconography and imagery that happens in my work right now. I’ve always used language and text in my work but I'm thinking about that as it relates to people in my life recently that I’ve lost, friends and family, and grappling with that in the only way I know how: with a little bit of sugar, a little bit of humour, and trying to make sense of what I’m doing now. Trying to make it more poignant and precise and more elegant and allow it to resonate more with people on a lot of different levels. When I first started making things I thought you had to make things that took a stand, that objected to things, that made some kind of political statement, and I know now that I know so little. Those things I was really dogmatic about when I was first making work don’t apply anymore. So my work now is attempting to be inclusive on a lot of different levels. People who speak spanish, who don’t speak spanish, who are of a different culture, who have a different belief system. I’ve always drawn on art and art history as references, the three major genres of painting: landscape, portraiture, and still life. I always go back to that iconography as a way to invigorate my own self-exploration.

RHA: Considering all these ideas and concepts and stories and personal experiences, how do you decide which stories are worth telling?
RA: You know, I like the novelas.

RHA: The drama!
RA: Yeah! I love the heat, the power. What I really love is that line between what is beautiful and what is grotesque, what is humorous and what is sad. I gravitate toward musicians, graphic artists, novelists, and visual artists that do the same thing. Recently, John Prine died and he’s a good example because he would put something incredibly funny and something incredibly sad in the same song and it just brings me to my knees thinking about it. I hope my work does something like that, uses that kind of methodology and process to peel away the layers of peoples defense system.

RHA: Speaking of that, how important is it to you that the viewer understands your art or what you're trying to say?
RA: Going back to what I was saying about inclusivity, I'm used to using things that are mundane and ubiquitous. Everybody can understand a plant in a vase, everybody can understand a coyote, a bull, or a crow. These aren't difficult things to understand. But if you allow them, they speak on a whole other set of layers and levels going back to art history, to mythology, to popular culture, and to belief systems. It’s very layered, but in the front end it’s candy. It’s like a neon sign, everybody loves a neon sign, or everybody loves a sunset. So I love taking that iconography and breaking it down and challenging you to think about it differently. A sunset for example, historically, was representational of someone dying. A sunrise is representational of someone being birthed and this goes back to ancient times, before we could read we understood pictures. It’s something in our DNA that we understand. So I take these things and layer more things in them and present them in a package that is very easily enjoyed on a lot of different levels. You know, I love a blue bear, I love a blue crow, I love the color blue or purple and those are the kinds of comments I get. When I was first making art, those were the kinds of comments I would want to throw something at! But now, I realized that's really the good stuff. When I was in graduate school I used the pseudonym El Pico, and for me it was like the picos you get on your calcetines when you come in from playing outside and my grandmother would have to pull those off. So when I was in grad school, I loved the idea of being like a sticker that was constantly poking you like, “Pay attention to me, this is what this is about”, and in a way I’m still doing the same thing but I do it with a spoonful of sugar.

RHA: Can you talk more about your approach towards your art and how it has changed over your career and how it's expressed in your recent work?
RA: In the beginning I thought everything was about brown and white issues. Now that I’m more well traveled, I’ve sort of given myself permission to use not only my culture and my ethnicity, but other cultures and other ethnicities. I understand there’s a stronger connectivity between cultures and ethnicities than there are things that make us different. I have less rules about things now. In the beginning I was very “This is right and this is wrong”, or “This is what constitutes a painting and this is what constitutes a sculpture” but now, in my own processes in artmaking, I’m informed by people who are self-taught and people who have been doing this their whole life. In the beginning I thought I knew everything and you kind of do at a certain point, but then you break into this other level where it’s this whole other world that you weren’t aware of and that’s kind of where I’m at right now.

RHA: Going forward, are there any other concepts or mediums you're interested in exploring or are exploring now?
RA: I’ve been hammering away at the same thing for a very long time. I’ve expanded my repertoire in the last eight years or so into printmaking. But I’m collaging more, I’ve always been a collage artist, a painter but I paint in a way that visually, they look like collages. And I’m adding lightbulbs to a lot of my work now.

RHA: I’ve noticed that.
RA: I’m creating this kind of new, updated constellation; again related to notions of chance and being born of the right star. I just feel like I’m at a place in my life where I’m very fortunate and a lot of my work, even though I don't mean it to be, is autobiographical. So I’m just mining old ideas for new ideas, it’s what I’ve always been doing